It was always my intention to have an easy week this week, but even by my lazy standards I think waiting till Thursday to go for a run was pushing it.
When I did drag myself out of the door I managed 8 road miles and when I got back it felt like I had just completed a marathon, Knackered absolutely knackered I was. So maybe they is something to be said for training every day.
After Thursdays "epic" I decided another days rest was due so on Friday I did nowt again.( mainly because I knew it was Blake Fell race the next day )
I did this race last year and looking back in my running log I said that I had hated it due the shortness (4.5) and the last descent. What a difference a year makes, this year it felt a little easier  and much more enjoyable. I was a bit more cautious this time from the start and decided to try and keep up (or keep sight off ) with Ian Davis of Keswick. After the first two climbs I was just behind him and started to follow him to the last checkpoint, but knowing Ian to be a better runner then me, I was wary of overtaking him. Still thinking about the last descent I decided that I would need a bit of space between us so I pushed on ahead and it wasn't till the last stile I looked behind that I knew I had done enough. 5 mins faster then last year but a slightly changed course so I wont read to much into that.
On my way to Blake Fell I was feeling guilty about missing the opportunity of a long day on the fells, but its races like these and catching up with folk you aint seen for a while that makes it all worthwhile. Also got some good advice and tips for the BGR.
On Sunday I ran along to High Raise and back from Pooley Bridge.
Posted by Stu Stod at 21:11 2 comments:

This has been a better week of training with some good hilly road and a few valuable fell miles too.
Monday night saw me doing three laps of the New Streets Race route in a vain attempt to try and get some climbing in, but I don't think any amount of hilly road could prepare you for some of the climbs we face on the fells, but still a good  work out, covering 16 miles.
Wednesday was club night with Eden Runners, where they seems to be more and more fell runners attending, which is fantastic news for the club. The session tonight was mile reps, done on a slightly hilly course. I hate these, in fact anything that involves running flat out I hate. The competitiveness that is in the club at the moment saw the first one done like a race, but by the time we did the fifth one things had steadied up , thankfully for me. They tell me that these help endurance, well I have never been in fell race yet that involved running 5.40 mile.I am lucky if I break the 10 minute mile.! 9 miles covered.
Thursday was a recovery run around the streets of Penrith, a nice gentle pace which suited me fine. 6 miles covered.
Saturday was a top day. Recce of leg 4 of the BG. This is the only leg that I hadn't done before now, apart from the section from Gt Gable to Honister which is part of Borrowdale fell race. Five of us set of from Seathwaite farm and ran over to Wasdale for the first big climb of Yewbarrow.  Mark Nicholson was showing us the best lines and I feel a whole lot better about this leg now,  and I am looking forward to recceing this leg more now that I have got the basic idea of it. 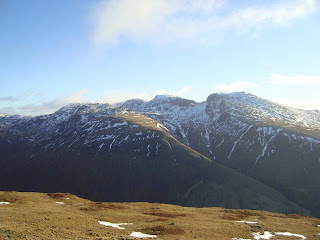 Conditions were fantastic until we reached Red Pike and the cloud came in on us. They was only snow in the gully's and we had to kick holes in  to get over them and some of the rocks had ice on them so we had to be careful. This was made even more obvious when Craig took a bad fall coming down to Wind Gap and after trying to run through it, it was decided  we would  miss out Kirk Fell and Gable and bear left at Black Sail Pass and make our way to Windy Gap and then down to Styhead Tarn and back to the cars at the farm. 16.5 miles covered. 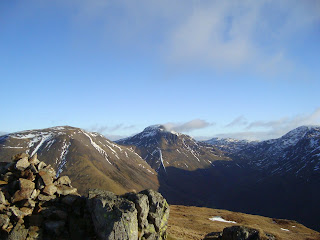 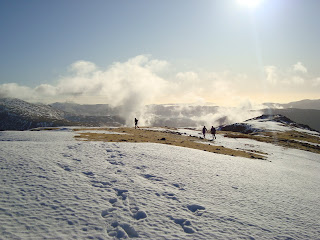 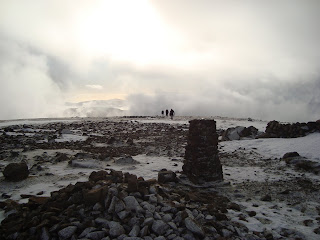 Sunday I got up early to do leg 1. Parked the car at Threlked and ran to Keswick, up to Latrigg car park, where sleet was beginning to fall. At this point I decided to do a low level fell run instead and ran up to Skiddaw House and back to Threlkeld, and then back home to egg and bacon sarnies. 13.5 miles
Posted by Stu Stod at 17:23 1 comment:

Feeling a bit guilty writing this post.
I have been bleating on about not getting a long fell run in, and today, blue sky's and fast disappearing snow I managed a 7 mile fell run.
I  have forgotten what wet feet feel like.
Its a pity the BGR isn't 8 miles long , I reckon I could have a chance...

Parked car at Threlkeld this afternoon and ran along the railway track to Keswick where it was my plan to run up to Skiddaw. I knew whilst I was running up Latrigg that my legs were tired , and that I proberbly wouldnt run it all the way to the top, so I told myself if I could run it all to the gate where the path goes left to little man, that would do. It was quite a cold wind too, which didn't help my motivation.
I managed (somehow) to run it all to the gate , even so it was a struggle for me, but then I thought I would carry on up to little man. I set of running again but only got about 50 yards, when the snow was too soft and deep to run in, so for about 2-3 minutes I walked. The path soon became solid  and I got running again.
Total running time from Threlkeld-little man-Threlkeld was 2 hours and 15 mins, still not a long day out but getting some climbing in. The path up to Skiddaw today was well trodden and was getting icy in places, I think that the snow is going to be here for a while yet, so am thinking of getting some Kahtoolas 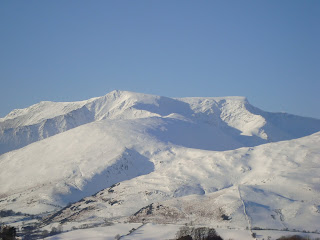 Blencathra taken from lay by on way to Threlkeld 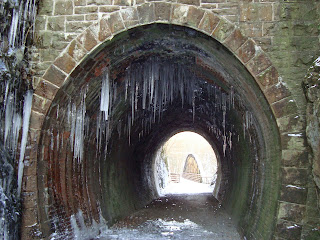 Best not hang about!

I have been threatening to do a night fell run for some time now, the only other time I have run on the fells at night is helping out on a BGR, so tonight after a few texts with Steve B we decided to run up to Arthur's Pike from Pooley Bridge. Not a massive fell , but still enough of a climb to get you working, especially with the snow on the ground. It seemed a bit longer in the dark and I was happy to see the cairn that marks the path to the summit.
This run has whetted my appetite for more night runs now and hopefully will do some more in the coming weeks. Susan thinks im bonkers but I absolutely loved it and it beats running on the roads.
On Monday night I ran a steady 9 miles around Penrith and on Wednesday I ran the New Streets route with Mark Nicholson, where I got to bombard him with questions on the BG, himself having done it 3 years ago. I think he was glad to see the back of me!
If I can get 2 longish fell runs fitted in at the weekend I will be pleased, just hope they is no more snow  (sorry Iain) as it hampers my long runs plans.
Posted by Stu Stod at 22:00 4 comments:

Since I broke up from work on 22nd Dec I have managed a fell run every other day and since xmas eve I have ran 69 miles, not the big mileage I was hoping for over the holidays, but with the amount of snow on the ground, happy enough.
This morning I again parked in Pooley Bridge and ran up to Atrhurs Pike, where the views over to Helvellyn were fantastic, only had my phone so took some pics with it. On the way back down I ran up to Haughscar Fell before running/sliding back to Pooley Bridge. 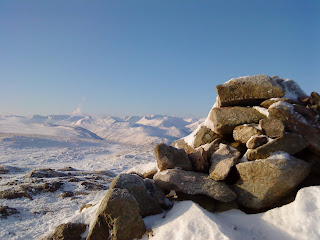 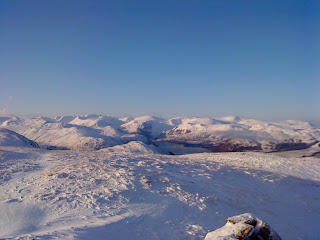 Back to work tomorrow so it will be back to running on the roads on a night and hoping for good weather on weekends.
Posted by Stu Stod at 15:12 1 comment:

Didn't make Leg 2 on Wednesday - sky full of snow and winds put me off! Instead I parked the car at Pooley Bridge Post Office and ran up to Arthur's Pike.
This made me realize that I made the right decision in not doing leg 2, as the conditions on this lower fell were horrible.
New Years day was The Nine Standards Fell Race- a 8 mile route which includes about 2 mile road , a mile bridal path and a mile fell. With Steve B unable to make it the pressure was off me to try and keep up with him.
About 70 runners had entered with about 10 from Eden, a good turn out for a fell race and hopefully they enjoyed themselves enough to do more in the season ahead.
With the icy road section at the start a rolling start took place which meant a gentle run instead of a mad dash. Once out of the town  it was race on tho.
I found myself having a good climb trying to keep tabs on a club mate just ahead me whilst trying to keep ahead of Gary Johnson just behind me.
The fell section was deep snow and I reached the summit in 6th position.
On the descent I managed to overtake another runner and then got myself involved in a race with my club mate (Anth Labrum). We over took each other couple of times before the icy road section where I took a tumble but  bounced back up, its worth noting here that even so Anth was ahead of me he shouted to make sure I was OK.
I managed to overtake him on the road section where we crossed the line only 5 seconds apart, 3 mins slower than last year but running in a foot of snow on the fell this year.
Eden took home both team prizes too.
I think running in the snow this Xmas has helped me a lot but still I need to get some longer runs in and recce the bg route a lot more.
Posted by Stu Stod at 13:08 No comments: