Making the most of the holiday period with some good fell runs already in the bag..... and more to come, I hope.

Monday I went along to the local tri club and did some speed work and then had a steady run run around town afterwards.

Tuesday and Wednesday I had a did a few easy miles around town.

Thursday I ran up to Arthur's Pike, a run I had neglected for a while.

Friday I parked at Threlkeld and ran along the railway line to Keswick, up the side of Latrigg and then followed the Cumbrian Way footpath for a bit till I cut of it to go directly up Lonscale Pike, a top that I have wanted to go up for a while now. I followed the fence line straight up and then after visiting the two cairns, ran along to the main Skiddaw path, where I then ran up to Skiddaw little man. Great views were had.
I returned to Threlkeld by running down to Latrigg and then back along the railway line.


Today, Sunday I again parked at Threlkeld but this time ran/slogged up Clough Head. Always a good work out!
On the descent I put on my Kahtoolas, something I purchased last winter, which made my descending easy, even running fast over sheets of ice!!

Only 10 days since my last post, but a lot as happened in that time - A county championship XC race, some speed reps with a tri club, a 4 mile road race and pacing leg2 of a BG mid winter attempt.....oh and a couple of heavy nights out!!!
The XC was held at Keswick and I wasn't going to run this but with the langdale 10k cancelled due to the snow, I thought "what the heck".
A lot stronger field then the usual Cumbria xc league with it being the county championships, most notably  a strong contingent from Border Harriers.
It was 4 laps of a fairly fast course and I soon found myself in a race with Graham Millican of Border, and as the norm, he proved too strong for me and beat me by 19 seconds.
I was quite pleased though with my effort and I feel that the speed work I have put in over winter is starting to pay off.
James Douglas won it finishing ahead of Ricky Lightfoot, who after the race said that he was thinking of having a go at the winter Bob Graham record the following weekend.

The same night was the first heavy night out which resulted in having a very lazy Sunday.

On a Monday I normally run a few miles around town, but this week I took myself along to Aragons Tri club who hold weekly speed sessions. Really enjoyed these, even if was questioning my sanity after each one.
I will try and do more of these.

Tuesday morning resulted in my legs feeling a bit stiff so I ran a few miles around town delivering Christmas cards for Susan!!!

Wednesday was club night and the dreaded New Streets Race.  A tough 4 mile race taking 4 of the steepest hills Penrith has to offer.
Last year I set off too quick and paid for it later on where I really struggled up the last two hills.
About 30 of us set off, and again I set off too quick (I will never learn) and I soon found myself out in front, but this time I felt a lot more relaxed and held on to  finish first, mainly due to the fast lads not turning up and Steve b still feeling the effects of falling of his bike the day before!

On Thursday I had a call from Nick Ray who was organising Rickys BG. He thought it wasn't going to go ahead. I must admit of feeing slightly relieved as I hadn't done leg 2 in dark.

The feeling of relief didn't last long though because on Friday I got another call saying it was back on and if I could do leg 2. He Had Steve Birkinshaw for leg 1, setting off at 1 am.
As Well as I know leg 2, I didn't want the responsibility of taking Ricky alone so I phone some good fell running mates, Craig Smith and Sam Ware. Their were well up for it and as it turned out it was one the smartest things I have ever done.

4 o clock Saturday morning, me Craig and Sam are sat in my car at Threlkeld cricket club. Not a star to be seen, no sign of the moon, freezing cold and wanting to get going to get warmed up.
Eventually we see 2 sets of head torched coming of Doddick.
After a few falls on ice on Skiddaw, Ricky and Steve arrive in 3 hrs 28 mins. No road support for Ricky, Steve was going to run back to Keswick for his car, so I gave him my car to take to Keswick.
It was good to get running and Clough Head was reached in 45 minutes.
Gt Dodd was found and Sam took a bearing for us to Watson Dodd. The path to it could just be visible but we had to spread out to find the cairn. It was the same on Stybarrow where we wondered about for a few minutes looking for the top, once found Sam took a bearing to get us back on the path to Raise. It was snowing Heavy now and the wind made it even colder. The freshly laid snow was hiding ice and great care had to be taken.
Raise was found and I thought that the nav would be straight forward now but we got totally disorientated and the map and compass had to come out again. for 3 or 4 minutes we were lost, but Craig took a bearing which didn't seem right, but we trusted the compass and eventually we came to the path which had a few footprints in ( there were 3 other teams who had set off 4 hrs ahead of Ricky).
Going up Whiteside was tough with the wind and the snow getting blown in our faces and when we stopped to record the time at the summit noticed we all had icicles hanging from our faces! Our drinks had turned to slush puppies.
It wasn't till we were coming down from Dollywagon to the tarn that the dark started lifting, what a relief. Even so I slipped and slid about 30 yards on my back, trying to dig my heels in to stop.
Craig and Sam stayed at the col whilst I took Ricky up to Fairfield. With light coming through now, this big BG climb felt easy after the night we had been put through.
Once on top I took my spikes and gave them to Ricky so he could descend with confidence and reach Craig and Sam to go up Seat Sandal.
We all reached Dunmail  4hrs 10mins after we had set off. Ricky was still well under 21 hr schedule and myself Craig and Sam were relieved to of got him there in that time in some horrid conditions.

It was decided at Dunmail that it wasn't safe to carry on, all the roads were blocked to Wasdale and Honister and Ricky probably made the right decision, with the only other team that had carried on after Dunmail retiring after finding Bowfell too Icy.
A top effort though.

As for me, the night made me realise no matter how well you think you know the fells, dark and extreme weather can make it a totally different monster. So much so that I today purchased a cheap GPS to throw in the packpack............ Just in case!

Later on that night I indulged in my 2nd heavy night!
Posted by Stu Stod at 17:20 4 comments:

Club night at Eden runners thrown into chaos with the weather, but no such let off's as club coach Alan Marshall arranged a run up to Beacon Pike, followed by some road miles and then another short off road section thrown in.

3 Races In A Week - All Cancelled

On this blog this time last year I wrote  - 3 Races In A Week - in which I did the Cumbria XC , New Streets road race and the Hexham Hobble. I was hoping to write the same title again this year, but the snow and frost caused all 3 to be cancelled.

Still managed to get some good miles in though which included 3 town runs during the week,and one really enjoyable fell run of 17 miles on Sunday.

The first town run was about 7 miles in the snow, which made me a good moving target for some kids (2 near misses and 1 direct hit) throwing snowballs. It felt like running on the fells to be honest with the snow making the pavements all bumpy and uneven.

The 2nd town run involved about 5 of us who turned at the club but didn't fancy the speed reps that Alan had planned, so we had a run around town which included a run up to the BEACON.
Quite magical in the dark with the snow on the ground giving us enough light to find our way without torches. The sky was full of stars and Steve B tried his best to show us all his knowledge of the galaxy, which amounted to " I think that's the plough"!

The following night I again ran up to the beacon but added a couple of extra road miles in too making it 9 miles at a good steady pace.

Saturday I spent the afternoon fighting my way around Carlisle Xmas shopping, with the deal being I was free to go for a run on Sunday.

Parked my car at Pooley and ran up to Roehead and continued on the path that runs slightly above Ullswater to Howtown. 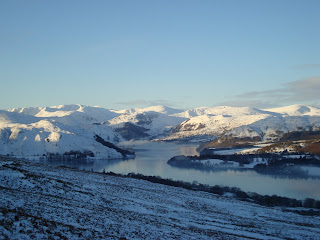 I continued up to the church and made my way along to Boardale Hause which was still all runnable until the last 5 minutes where the snow was too deep. I have never had reason to run up here before, always preferring the Hight Street range or the BG route, but this was about to get quite breath taking with clear blue sky's and snow clad hills. 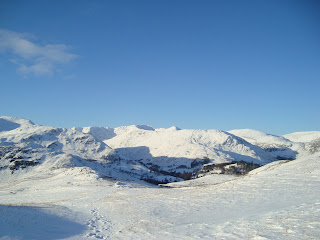 Once on Boardale Hause my plan was to retrace my steps put with being well up on time and the views too good I carried on to Place Fell, a top that I have never visited.

On my down I disturbed a herd of Deer where at first I thought there was about 10, but it turned out there was over 20. 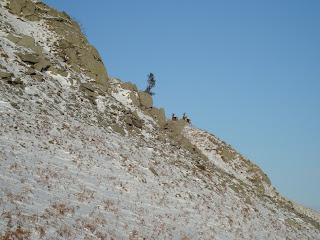 I got back to my car in 3 and a half hours, not bad going with the snow and views that I took in, but today my "bg groin" has flared up again. Hope a couple of days rest will ease it.
More photos can be found on MY FLICKR
Posted by Stu Stod at 22:10 3 comments: