Dont Come Near Me Mark Renshaw

The Sunday after Borrowdale I took myself up Arthur's Pike, parking at Pooley Bridge, running a steady 7 mile.

On Monday I biked out (and up) to Matindale church, Howtown. To most folk this would be no big feat at all, but this was my biggest bike ride to date, yep 22 miles in 1 and 1/2 hours and I thought I was going to pass out cycling up the small pass......... My plan is to try and bike up kirkstone pass before winter, but one bike ride a week is enough for me just now, it takes up too much time and its too hard!!!
Plus I tend to wobble all over the road when it gets too steep!!!!

Tuesday I met up with Steve B and again ran up to Arthur's Pike, at a pace that I could just about keep up, felt harder then normal.

Wednesday was Reeds Fell runners debut on the bigger stuff. Along with Haz and Rod, we ran the Blencathra fell race route in a little over 2 hours, a good effort in what was awful conditions (hailstones, clag and finally sunshine). Haz has got the fell running bug and I think he might even do Blencathra next year..... hopefully.

Thursday I was changed to go up the fell again but changed my mind the last minute. I'm meant to be doing Langdale Marathon in 6 weeks and I haven't done much road running at all, let alone speed work, so I did 9 miles around the streets of Penrith which included a few steep road hills. It actually felt quite good, but im a long way off trying to blag my way round 26 miles of torture.

Today (Saturday)I ran 13 hard road miles in a little over 84 mins, quite pleasing really, and it was also very undulating, whether I could of carried on for another 13 miles tho is questionable.

Tomorrow we fly out to Turkey for a 2 week beach holiday, so I will throw in my road shoes and try and do a few miles the odd morning. Looking forward to lazing about the beach....... Its been a tough year... so far.
Posted by Stu Stod at 19:04 No comments:

Two cars, 8 runners left Penrith on Saturday morning for the Borrowdale fell race, the second time I have done it, the first I got hopelessly lost on.........Ill Crag.....don't ask.
This year I was more nervous, probably due to not racing much since my BG and not recceing the course at all since last year.
Due to this nervousness I started further back then I normally do and as a result ended up in the bottleneck at the start and having to walk, run, walk for a while until the course thinned out a bit.

The climb up Bessyboot went well and I was soon running with a couple of runners into the clag, which would stay with us all day until the descent of Dalehead. Luckily for me Gavin Blend joined us so I quickly got onto his heels and followed him up to Esk Hause, which in hindsight proved to be one of my better decisions after hearing how many got lost on this section.Following Gavin over this section showed me how important it is to know the course as he seemed to know every stone. I did tell him tho that I had no shame and his reply was "don't worry, no one as". So I thought the least I could do was share my water with him and the other runner!!!

On reaching Esk Hause I was met by Dave Owen, who had kindly offered to meet us with water, and then the climb up Scafel Pike beckoned.

I would guess at this point I was well up in the field, but the wet rocks over to Scafell slowed me down dramaticly and I soon found myself alone, at the very place I got lost last year. I was very relieved to find the col up to Scafel Pike to know I was still on track.

On reaching the summit I had to find the scree run down to the corridor route and at first I went far to far left and after a couple of minutes of scrabbling about I heard some voices above me, so I quickly climbed back up where I met 3 other runners also looking for it. Eventually we found it and we were soon sliding down the scree. I ended up staying within eyesight off the corridor path (didnt dare lose sight of it)  up until Styhead where again David had met me again with water, but this time I declined, I hadn't touched my other bottle yet.
The climb up Gable felt awful for me, and I knew from here on in I was in survival mode. I managed to keep going and I took an age to descend down to Windy Gap, but at least I was back in with a group of other runners, who all went too far left from Green Gable before I realised we were wrong and had to climbed back up.
The run down to Honister felt good but as soon as I hit the climb of Dalehead my legs had gone again and I had no water left.
I managed to hold my postilion tho and crossed the line 3 hours and 55 minutes after starting.

Just about everyone I spoke to at the end had some tale to tell about getting lost or taking the wrong line so my mishaps maybe weren't that bad after all. 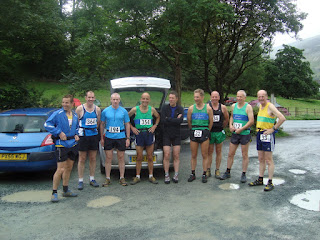 Next year im going to recce the course a bit more so im sure of the route and try and get under 3.45. (dream on!)
Posted by Stu Stod at 20:20 No comments:

Had a very enjoyable day last Sunday, where me and Steve Bennett joined up with Steve Angus and some of his mates for a run round leg 1 of the Bob Graham. We ran it anti clockwise, the first time I had done it this way, and hopefully the last. After saying that tho, we ran it in just over 3 hours and that was with a few stops.
I was concerned, that with the company I was in that I would struggle to keep pace, but in hindsight this run is exactly what I needed, pushing hard on the ups and fast descending gave me back some of my pre Bob Graham confidence and better still the groin wasn't to troublesome but the hip is still tender.
After the run we had a pint where I was amazed at some of the tales that were been told regarding training and other peoples exploits. Here are some of the following;

I did think about telling them about the time I completed Tomb Raider 1 without any cheats, but thought better of it. 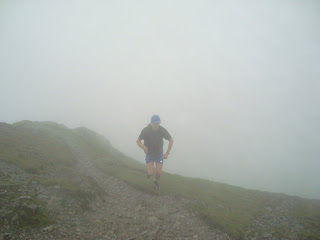 The following night I parked my car at the foot of Scales fell and ran up Blencathra again. The day before one of Steve's mates had dropped a gillet somewhere on the top so I thought I would go and have a look for it but the clag was even worse the the day before and had little chance of seeing my feet let alone a lost top. Still it was good effort. 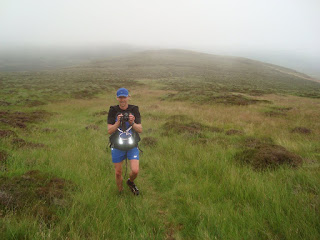 On Thursday I went to Ambleside Sports to do the Rydal Round Fell Race, the course follows the Fairfield Horseshoe race route apart from the start is slightly different (more brutal in my opinion).
This was to be my first fell race since the 3 Peaks back in April and I thought it would be quite low key, but a good few people I knew well were amassed on the start line, so it was going to be a race rather then a stroll on the fells for me.
The Start was fast and Steve Angus led the field out off the show field and along the track up to Nab Scar. This was to be the last I saw of Steve until the finish line.
I quickly settled and got into my stride but found myself running alone until Craig Smith caught me up along with 1st lady Jane Reddy and club mate Sam Ware. This proved to very good for me as it gave me encouragement to keep moving well. We kept swapping places up to the summit of Fairfield where Sam had pulled out a slight gap on us but by the time we contoured around Hart Crag we were all together again.
I had decided to keep on Craigs shoulder as he seemed to know the route quite well. Eventually Craig and myself pulled away from the others and began to put a  gap between us.
With less then Half a mile to go I pulled away from Craig and another runner who had caught us up. If the course was any steeper tho it would off suited craig more then me and he would off  romped home to the finish line ahead off me.
My time was 1hr 35mins and any other year that would of been good enough for a top ten but this year it meant 18th. A very enjoyable race and it reminded me what I have been missing. 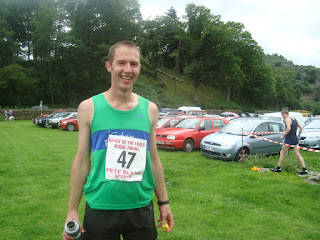 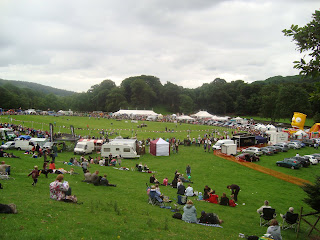 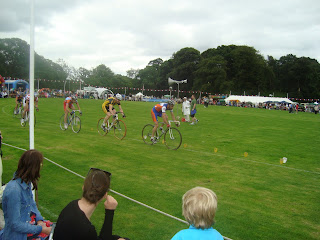 I have entered Borrowdale on Saturday but not 100% sure im doing it yet, as its a different monster altogether and it might be a tad too steep for my still sore hips. 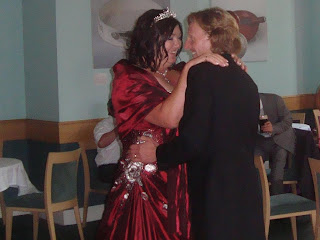 Congratulations to Mr and Mrs Angus who tied the knot on Saturday.......after 18years!!!
Posted by Stu Stod at 18:38 No comments: