Along with Lieutenant Commander Watson or Charlie from the post office as we prefer know him, we made our way to RAF Spadeadam for the Border Riever Half Marathon, a undulating course that is ran on road and forest track.

About 100 folk had turned up and a good few RAF personal.

The race sets of out of the base and follows the road for 2 or 3 miles and than mostly good forest tracks. I quickly found myself in 2nd position with the first guy about 30 secs ahead and the 3rd place a good bit back.
It stayed like this for about 9 miles until I missed a turn and carried on for about 2 miles on my own until the Military Police pulled up and said that I had gone off Course.

After a bit of cursing at myself I ran on to the finish and disqualified myself.

The 3rd placed guy was well made up when he crossed the line and got told he was 2nd tho!!!!

In my defence for going off course tho, they was a lot off missiles and rocket launchers to be looking at!

Charlie had no such nav issues and ran well.

I fear Steve B is going to have laughing fit when he hears about this....

Quick run down on the week...

Thursday..............Night run up to Arthur's Pike. Bumped into Sam on the way back down. Told him about my bike ride the week before. He told me about his. The Fred Witton. Ran back to the car feeling stupid.

Saturday...............Cross country. Agony. Made the mistake of racing someone who is obviously faster then me. Died on the last lap.Wished I did the Screes fell race instead. Photos can be found at Sportsunday. Link can be found on the right.

Sunday...................Intended to go out early onto the fells but made the mistake turning the TV on. Watched the Grand Prix instead. Late afternoon I ran hard up loadpot from Pooley Bridge and then pottered about easily taken photos.

Next weekend we are going away, so for the first time in 8 weekends they will be no race, but im hoping to do the Spadeadam half marathon on Wednesday, which is on trail.

After the Cumbrian Run last Sunday I had Monday and Tuesday as rest days, I was also covering a night shift, which takes a couple of days to get used to.

On  Wednesday afternoon I did a steady 7 mile road run.

On Thursday I parked my car in Pooley Bridge and ran up to Loadpot, it was a misty sort of day, but a very enjoyable run.

Friday saw me on the bike and my longest bike ride, in terms of time and distance yet.......26 miles in 2 and a half hours...... maybe not super fast but in my defence there were some hills in the route, one of them up to Dockray form the lakeside, which felt like never ending.
Once out of Dockray there is a small downhill section where I felt like "Armstrong", but in reality looked like a sweating, red faced, white knuckled joker with an air filled jacket .
I'm resisting the urge to buy proper cycle clobber in case people start to think " hey, that guy on the old bike looks a bit useful"
Got to admit though once I was off the lake road it was a lot more enjoyable with less traffic. I hope I can find time to do one ride like this a week.

Saturday was a day I was dreading but also looking forward to. Cross Country.
Dreading because its bloody hard and fast(ish) work and looking forward to because I know it will do me good in the long term.
Cockermouth was the venue for the first Cumbria Cross Country meet and after getting my start time mixed up (1 hour early, 1st there, looking really keen) I had a walk down into the town centre where its hard to believe that about this time last year it was all underwater.
After buying the "Press Guy" a tuna roll I made my way back up the the field where we were going to run.
I thought most of the quick guys would not of bothered  with it been fra relays the day after, but 1 by 1 they drifted in, Ricky Lightfoot, Phil Winskill,, Russell Maddams and even Carl Bell!!!!
It is run in an handicap system and last year I was in the fast group, but luckily for me, this year I've been put in the middle group, which also sets off with the 17 yr olds, and the faster group stetting of 3 mins later.
For the 1st 2 laps I was 17 again but by the last 2 laps I was a sorry 42 year old, hanging on for grim death.
On the last lap first Ricky passed me( who even tried to talk to me, but I was incapable of speech), then Phil who was having a battle with Russell, but still had time to push me up the hill, git!!!
I waited for Carl to pass but I held on for 4th ( don't forget, its handicapped).  Carl must of got lost in another field!!!!
A good turn out as always by Eden Runners and as it turns out a very enjoyable day.

Today, Sunday, I took myself up to Kidsty Pike from Pooley Bridge, a run that will get longer as the weeks pass by.
Readers of this Blog (both of you) might of noticed Blipfoto which is just below my followers.
Its takes you to another website which allows you to post photos each day and other people can leave comments on. Every week the Big Chiefs at Blipfoto gather around a table and choose a "photo of the week".
This award is very prestige and some wanna be Blippers would give their right arm to win it, well, guess who won this week....................
The winning photo can be found on the 10th October and the winning announcement can be found at BlipBlog
All very exciting........... even if it was for a very bad photo!!!!!!!

“This will be a day long remembered. It has seen the end of Kenobi, and will soon see the end of the rebellion.”
Posted by Stu Stod at 15:39 4 comments:

Struggling to get the miles in I did before the BG, from Xmas to May I tried to do 50-70 miles per week with most of them done on the fell. Since May I have been doing about 35 - 40, but its harder when you haven't got a particular event to aim for.

With the dark nights coming in it will be back to the club on a Wednesday night and for some of Alan's tortuous speed/endurance runs....... I wonder if I could persuade Steve to do more night running on the fells?

The cross country season starts this weekend so I will try and do as many as possible over the winter.
Not many fell races left for me this year, maybe 2 or 3, so I will try and improve my speed and hill climbing over the next few months. The speed thing I will find hardest to improve as I hate doing reps of any sort ( too lazy and its hard work) but it would be nice to improve my 10 mile time, currently 63 mins set 2 years ago, but I wont hold my breath.

Last week on Monday I ran a steady 7 miles on the roads around Penrith in 49 minutes and it felt comfortable, which was nice considering it was the day after the Ian Hodgson.
On Wednesday, along with Steve and Sam we ran up Blencathra and over Bannerdale crags, well I tried to run it all but I was finding it tough with the pace Sam was setting and walked up some parts. It was on this run that Steve and Sam were talking about the amount of bike miles they are doing and it seems to be helping them on the hills....... I hate biking but will try and do a few more miles this winter.
On Friday I parked my car at Pooley Bridge and ran up to Arthur's pike and back. Took it easy and enjoyed it, running at an easy pace over the fells, you cant beat it.
Saturday morning I put the bike to the test and did 15 miles (its a long way for me!) in just under the hour but didn't enjoy it all, too bloody dangerous. I texted a mate and asked him if spinning classes would have the same effect - his response was that it was more for lasses..... spinning it is then!
Sunday I did the Great Cumbrian Run, a half marathon around the edges of Carlisle. This is all part of my plan to try and improve my speed by doing races instead of reps and things.

Very pleased with my time of 1 hr 21 mins 59secs. and to be honest I don't think I could get any quicker without putting in all training sessions that road runners do.
Roll on Spring.

Second year I have done this now and I've got to admit, I love doing it.
In a fell race, your on your own and the only person you let down is yourself, but with a team event such as this you really don't want to let anybody down and as a result, if you paired with someone of equal ability, you really do push that bit harder.
Along with Steve Bennett I was down to run leg 2, a leg we have recced 3 times over the last few weeks, so we were more then happy to see the clag well down and rain lashing down.
Waiting for the leg 1 runners to come in, we were very surprised to see the Keswick open team come in first, with Borrowdale a good 7 minutes behind them, obviously the weather was playing a part.

Our own team had put 2 quick runners on leg 1, but something had not gone well and they arrived in 29th place.With a quick change over we were off, with me slightly ahead of Steve (Steve normally needs a mile and then he seems to have a turbo button). By the first checkpoint we had closed one team down and by the second we had passed another 2 teams.
The clag was down on the tops, but we never put a foot wrong and we were joined by the Todmorden pairing, who would be by our side the rest of the leg.
On the line down Threshthwaite mouth we kept left and picked a good line all on grass down to the bottom where we passed another team.
The climb up towards the beacon was tough, but I was relieved to be heading up because route finding was all straight forward now.
High Street came with another team passed and then it was all down hill, which Steve lead and I followed, through the beck and then down the fast track to the finish.
We passed over to Sam and Bernie with a feeling of job well done.

We had passed 7 teams and were 14th fastest overall on leg 2.

Sam and Bernie continued the good work and passed another 3 teams before handing over to the leg 4 runners who passed 5 more teams to bring us in a very credible 14th position. Last year we were 33rd.
Eden Runners is a small club, so we were delighted with the result. 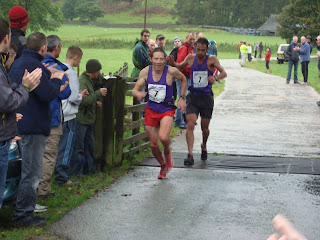