Getting Back To It

After 3 weeks of no running and my knee getting stiffer I asked the physio if I could start running again. She agreed to it at the moment but stated once she understood the problem more she might have to stop me again. It seems she is not sure what the problem is, but has since ruled out tendernits and gone back to it being a Bakers Cyst ( which would explain my knee getting stiff and unable to squat ) and also a very stiff back ( which would explain the pains I get in the hamstring ).
Two hours after getting the go ahead to run again I found myself at  roehead  for a short run up to Arthur's Pike (5 miles). It was lashing down with rain but I didn't care, it was good to be back running again, or so I thought till I started the climb from the beck, my legs were struggling and the wind was blowing me back down. This was hard work, Christ it was only 3 weeks not 3 months! Its not even that steep, just a long pull up. I finally reach the cairn and turn around to run back when the clouds cleared and the wind dropped for a few minutes , it felt like it was taking the mick out of me!
Got back to the car exhausted but very very happy.
That was Monday and on Wednesday I ran past Arthur's pike to load pot Hill  (8 miles)which  I found equally challenging but just as rewarding .
Thursday and Friday I rested ( well it was wet) and on Saturday morning, because of local  floods I was forced to park my car at Askham instead . My run took me over  Haughscar Hill , past Arthur's Pike, over Loadpot Hill and  Wether Hill. At the wall I turned right and headed down to Fusedale before I climbed up onto Steel Knots and then followed the path back to Haughscar Hill and back to my car. 15 miles and  I was knackered but chuffed to bits. 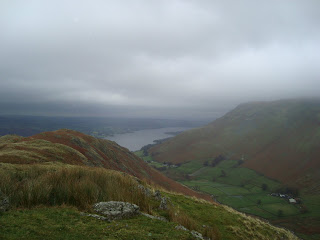 Looking down to Ullswater from Steel Knotts


Whilst I was running I kept thinking about the Brampton Carlisle road race which was taking place at the same time, a race I would of liked to of done if I was fitter but I doubt I would of got as much enjoyment out of it as I did today.

On Sunday I again parked my car at Askham to have a steady run up to Arthur's Pike but the weather finally beat me just past Haughscar Hill and I retreated back to my car and home for bacon sandwiches! (3miles). I am back to the physio s tomorrow . Hope she doesn't change her mind. 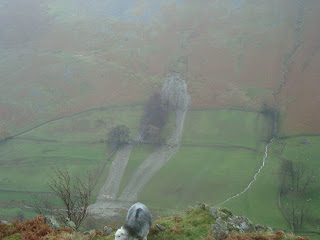 A small landslide below Loadpot