I am already very familliar with legs 1 and 2 of the Bob Graham  and really should be recceing more of legs 3 and 4, but partly because of this blog and partly because I love doing the first 2 legs, I thought I would start a fresh.
Leg 1 starts at the Moot Hall in Keswick visiting the summits of Skiddaw, Gt Calva and Blencathra and finnishes in Threlkeld.
The route up to Skiddaw is pretty much straight forward, going up Spoony Lane, round the side of Latrigg and then the big obvious path up to the summit.
I reached the top of Skiddaw in about 63 mins. 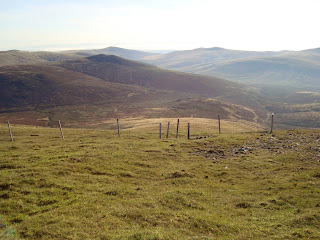 The next peak is Gt Calva and to reach it I continued past the trig point and down the path until it flattens out a bit and then turned right towards the fence.In the fence there are 4 posts together. In mist it is vital to find these posts, as I have crossed the fence too far right and too far left and wasted a good bit of time. Once over the fence it is straight down where eventually I pick up a faint trod that either takes you over Hares Crag or around it, I always choose to go over it. I cross the Cumbrian Way footpath and then follow the stream up towards Gt Calva. There are posts with reflective tape on  (good for night) at the start, but I cannot remember seeing them today, I hope no one has removed them  (another excuse to recce this leg now). At this point I noticed another runner up ahead, turning for the summit.
Once at the summit I turn back on myself and head back to the lower cairn where I crossed the fence and follow the well worn muddy path down to the bottom. Following the stream to the sheepfold I met the other runner who I had earlier seen going up Gt Calva. He too was recceing leg 1 and was'nt sure where to cross the river at, so for the rest of the leg we run together. We crossed the Caldew and then made the long slog up to Mungrisdale Common.
Once on the Common we joined the path which takes you to Blue Screes and then cut across it to contour around to the summit.
The past 2 times I have come down Halls Fell I have made a good line down the grass to the right of it and then rejoined it at the nick, where it is more run able ,but this time I went too far right and lost a bit of time coming back again, I think the secret (for me anyway) is always keep the line of the ridge in sight.
At Threlkeld Seb was met by his wife and I ran back along the railway line to Keswick. Seb, who is from Dumfries suggested the next time he was down that we could do some recceing  together, which would be useful for having a car either end of a leg.
My time for this leg was 3.13 which is a not too bad , considering I would like to do it in 3.30 on the day of my round. I plan to leave Keswick about 1.30 am so i'm coming down Halls Fells in daylight.
Posted by Stu Stod at 20:01