Into the Month of May

Since the 3 Peaks  I have continued all my running on the fells, putting in 69 miles (approx 19000ft, 84miles,23500ft if you inc 3PPP) in the last 8 days. The pleasing thing for me is that my legs and joints are feeling good and strong at the moment. They is no question though that I have lost my short sprint speed, but that is definitely not needed on the Bob Graham Round.
The one big worry that I have is that I may not of put enough long days in, I have done loads of 4-5hrs a few 8 hrs, but  my longest day out has only been 91/2 hrs. I know im comfortable up to 91/2 hrs but what I will be like after 15-16hrs? Also Im due a scan on my troublesome knee soon, but im trying to put that well and truly to the back of my mind, it only really hurts now if I try to fully kneel down on it.
Another concern is that the only part of the route that I have not yet recced fully is Broad stand. I have been down foxes tarn before but would like to look at the other options. Hopefully on Saturday I will get that chance.
On Saturday just gone I was due to recce leg 3 with my navigator but unfortunately he couldn't make it, so I drove to Dunmail with the plan of going as far as Esk Hause before coming back on myself.
As I pulled up they was a road support crew in waiting and when I looked up Seat Sandal I could see the runners charging down.
Rather then get in the way I set of up Steel fell and waited for the runners to come up. I asked if I could continue along with them as far as Esk Hause to which they said I was more then welcome..
This was a stroke of luck for me as they showed me the correct line up Bowfell and Rosset Crag.
The fella attempting was Stuart Pitcher and he was on a 22 hr schedule and moving very well. His Navigator was Eddie Winslow, who did his own BGR in winter and his other mate was Neil? all Ilkley runners.
Stuart Im pleased to say completed his round in 20.59, fantastic. 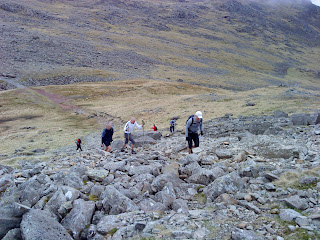 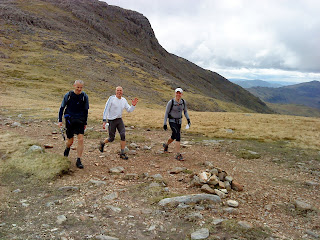 Neil, Stuart and Eddie
Today I once again went round leg 1 with Anth, who is supporting me on this leg and he wanted to have a good look at it first.
Again it took me under 22 mins from the summit of Blencathra to the cricket club car park, so nothing to worry about there ( I hope)..
Posted by Stu Stod at 19:09