Never Again (until next year!)

Set off to do the Three Peaks Fell Race on Saturday morning with the intention of running it at a easier pace then last year, wanting to feel much stronger at the end and not feeling as battered.
The race started and I set off along with Nick Ray in a very relaxed manner, which is unlike me, but the heat was going to play a part today so no need for any heroics in the first few miles.
The climb up Pen-y-ghent felt ok and the summit was reached in 35.15 and in 70th position. I noticed Ricky Lightfoot wasn't amongst the leaders as they streamed past us and figured that he had pulled out. A brief chat with him before the race he had hinted as much due to a knee problem, a real shame too, what with Rob Jebb not running it was a good chance for him to win it this year.
I had a good comfortable run to ribblehead that felt easy, picking off a few runners on the way and eventually ran along with a Pudsey runner up to the viaduct. He pulled away from me on the lower slopes off Whernside whilst I tackled an Eccles cake, which just about took me the whole of the climb to eat!
Running along the top I felt my calf's tighten up a bit so took it easy for a while till they got used to running again.
Got to Hill Inn feeling a lot better then last year and pushed on up to Ingleborough  Where the climb seemed to pass in no time at all. it wasn't till I turned around after the checkpoint that both my calf's got cramp, I had no choice but to stop and stretch them both whilst I lost a couple of places. I managed to get going again and had a good descent catching another 5 runners on the run in to the show field.
Crossed the finish line in 3.39.and in 35th position, but more importantly feeling a lot stronger then I did last year. 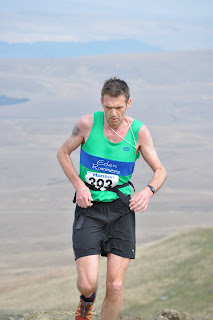 Climbing Pen-y-ghent
After a quick soak in the river and change I sat down on the warm grass looking up at Pen-y-ghent eating a sarnie, and then a burger and then a bit of cake and then a cup of tea followed by some cola.

Probably do no more racing now until after my Bob Graham Attempt at the end of May, instead do some slow hill miles and recce leg 3 a couple of times to get used to Broad stand, if I do decide to go that way.

a great result! must be a massive confidence boost finishing feeling so strong.

...out of interest did you carry any drink with you? and did you eat just one eccles cake? i think i might be eating too much!

Kate I did carry a drink with me and also sent 2x 1/2 ltr nunn to the 2 water stations on the course. I ended up carrying the one in my bum bag all the way round. I had 4 gels too.
It is hard to know what to eat and when tho and its a learning curve for me too!!!

nice one stu... I was following your progress live on the sportident site while lying in bed trying to shake off a nasty virus.

I'm beginning to think I'll never reach my goal of 21 completions as that's two years in a row of being ill or injured.

you should be chuffed with your run - sounds as if you didn't push it too hard and still took a good chunk of time off last year's effort.

Hey up Derek, looked for at the start but could not see you, bad luck.
I actually got mistaken for you at the finish!?!?!
I remarked if i was derek hurton i would of been finished 10 minutes ago!!!