Can I Have The Same Weather, Just A Bit Cooler Please!!!

Last year whilst recceing leg 1, I met a fella Called Seb Pflanz at the Sheepfold by the Caldew, We recced the rest of leg 1 together and arranged to meet up again during the winter months. Due to either work commitments or the snowy winter we never did recce any other legs together, but we did keep in touch from time to time to see how the other was getting on with their training.

On Wednesday  night we met each other again to recce leg 5 (hill section only) as it was the only leg that he had not gone over before his attempt on Saturday, which I was navigating on leg 2.
I was a bit dubious about this as Im meant to be tapering mode, but it was good to meet up with Seb again and have another look at the descent of Robinson.

Seb had told me he was on a 23 hour schedule but I thought I had best turn up to Threlkeld early as he is a very experienced ultra runner and I new he would be ahead on his estimated time. 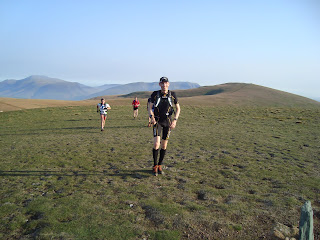 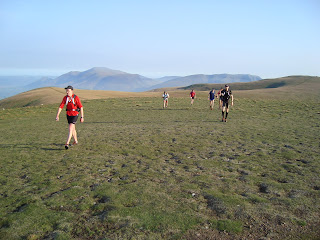 Seb with Dark Peak Simon just behind
Sure enough he rolled into Threlkeld early and after a shoe change we were off towards Clough Head with his other pacers Craig and Sandy, both Scottish. We weren't even on Gt Dodd before the banter started about the English and the Scottish, but I was quick to remind them who was going to the World cup, Seb is German born by the way!!!
The pace felt good and easy and I kept asking Seb if he was relaxed enough and he said he was fine at the pace we were setting.

Seb had set off from Moot Hall at 2am along with another group who was on 20hr schedule and we had caught them up by Watson Dodd, which did concern me a bit because they were bang on there own schedule and Seb was well ahead of his, but again Seb assured me he was ok with the pace.

Its worth noting here that both groups were about 50 yards apart at Dollywagon, whilst Seb went down the right of the tarn, the other team(simon, dark peak) went to the left. Seb stopped at the bottom to take his sock off as he thought he had a stone in his shoe, turned out to be a blister but we still reached the top of Fairfield just ahead of them.

From Seat Sandal I ran ahead to pre warn his valley crew he was on his way and to have things ready. 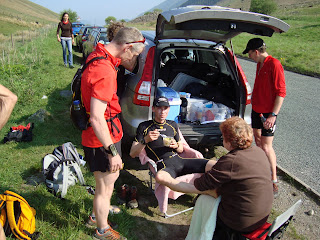 Seb had fantastic support
Seb arrived at Dunmail slightly ahead of 20 hour pace and im very pleased to report that he finished his round last night in 21hrs 47mins.

From my own point of view Seb did his round pretty much how I would want to attempt mine this coming Saturday, with getting to Dunmail ahead of schedule and then hanging on the best I can.

So, last week only 2 legs covered, but its taper all week for me now, apart from Wednesday when I might go for a light jog.
The rest of the week I will be glued to the weather forecast!!
Posted by Stu Stod at 11:20

I spotted Seb at Esk hause wished him well as he passed us, we were on the Old County Tops race glad he made it

Just a brief note to thank you for your brilliant pacing on leg 2, Stu. It helped to consolidate the 25 minute lead on my schedule over leg 1, allowing me to start leg 3 about an hour ahead of schedule. The weather was absolutely fantastic, although the price to pay was the high temperature. Bow Fell was tough, and after a pretty painful descent into Wasdale (feet were worse than thighs) the climb up Yewbarrow seemed endless and extremely slow. I couldn't believe it when I reached the top in 45 minutes, 5 min ahead of Bob Wightman's schedule (Jo, who'd already paced me on leg 1, was doing Tai Chi on the summit!!). The rest of leg 4 went progressively better, and when I got to Honister I only stopped for 3 minutes to have a bit of food and pick up my head torch. Simon (Dark Peak), the runner we'd been with over much of leg 2, had arrived just before us, but had a much longer stop - I was worried because he didn't look great, but was pleased to hear he completed the round.

Craig, who'd been with us on leg 2, and Colin, who'd helped with Broad Stand, joined me for the last leg, and we went up Dale Head into a beautiful sunset. We missed the bypass of the rock step off Robinson, but Colin talked me down it very efficiently, so it didn't waste any time. I remembered your comments about keeping on fell shoes as we came into Little Town, and because I felt good we just pushed on. I couldn't believe how much I had left in the tank - we did Little Town to Keswick in 43 minutes.

it was bloody hot for running about in. we were over in wales on a pb support. impressive, doesn't even come close. hope it cools but stays nice and clear for you.

All the best for the weekend Stu, hopefully the weathers going to be good for you.

All the best, Stu! Have a good 'un.
Malcolm and Paula

Have a great time Stu, enjoy it and keep putting one foot in front of the other! I'm up there saturday so could well see you? What time are you setting off - i'm sure I should probably know.....get packing those boxes!!

Thanks for all the best wishes.