The day after my Ullswater Round was Askham fell race, an 8.5 cross country type race with one big steep climb thrown in. It was my intention to run this but appeals by the race organiser for a marshal on Arthurs Pike summit convinced me to miss it this year, but I would still get 8 miles in by running to the checkpoint and back, at a considerably slower pace though.
What a good decision it turned out to be, watching the front runners fly by, to the to the back markers, who were putting in as much effort, if not more.
Morgan Donnelly won  it in record breaking time and as he passed us, he looked relaxed and as if he was having a stroll out. I wish the same could be said for my mate Steve Bennett, who crawled past  us, as if he had been shot!! Brilliant. Worth missing the race for that sight alone. 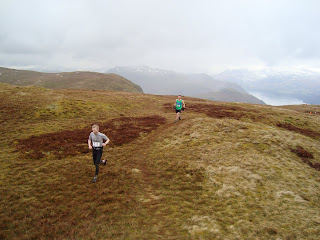 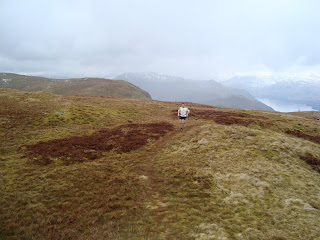 On Monday evening I had a run up Blencathra in what was very windy conditions, almost blowing me of my feet at times. a very hard 37 mins up and a easier 17mins back, Never seen another soul.

Wednesday, along with Steve and Sam we made our way over to Ambleside for the Loughrigg fell race, an evening 4 mile race with 1000ft of climb.
Good weather helped make a bigger then usual turnout. The race sets of at breakneck speed for you to try and get to the bridge to avoid any hold up. I was not quick enough and had to wait my turn to cross and then its another mad dash up a steep road which leads out onto the fell. By the time I had reached the fell I was done in, far to fast for me, I have got used to running up hills at a more sedate pace, with a Eccles cake in my hand!
I pushed on though because I knew Steve and Sam wouldn't be very far behind, but in all honesty I felt crap.
The summit takes an age to reach and as I turned around I notice Sam is not far behind.
A fall on the way down, but im soon back up (I blame the speedcross) and I manage to catch and overtake 2 other runners crossing the line in 32.27. There was less then a minute covering me Steve and Sam but, more importantly is its the 1st time in a year that I have beat Steve, he must of stopped for a crack with the summit marshal!!
At the end of the race I was disappointed with how I felt on the climb, thighs were in agony, never known that before. Im hoping its because I have spent all winter moving slower over the fells for longer periods.
Still, I was surprised to have done it 25 seconds quicker then last year so not all bad, but the climb definitely felt easier last year!. A good turn out of Eden Runners too.

The following day, along with workmates I had a run up to Arthurs pike. This was very reassuring for me because I ran it all very comfortably at a steady easy pace.. It was good to run too and not feel like I was having to push myself. A very enjoyable run where David Harrison is once again living up to his billing of being  hot favourite for this year Dumfries half again. 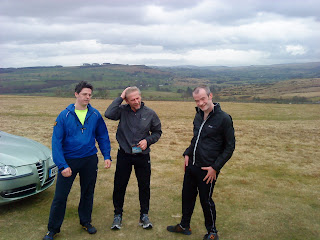 This week I have been covering night shift at work and my diet is all over the place, as well as my sleep. The job I do (printing) can get very boring and I end up eating loads of sweets ,crisps and drinking coke so I will be glad to get back on my normal hours next week.

Tomorrow, I have been invited along to recce legs 4 and 5 with Gary Johnstone and his pacers, who is also doing the bg the same night as me, which is rather worryingly only 7wks away now.
Posted by Stu Stod at 21:09