With the alarm going off at 5 in the morning after a week off covering shifts, I was asking myself if this was a good idea.

One hour and twenty minutes later 4 of us are running out of Seathwaite to the start of leg 4 at Wasdale , passing lots of wild campers at Styhead tarn on the way.
The four of us were Gary, fellow bg contender and his 2 pacers for leg 4 of his attempt, Kim Colinson and Clare Mckeown. 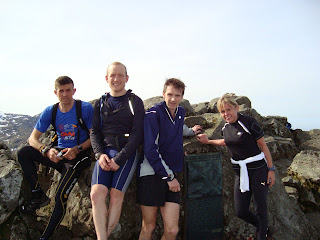 Gary, Kim me and Clare on Gable 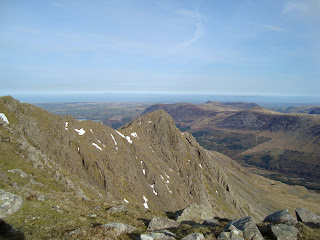 Looking back to Steeple
As we climbed Yewbarrow it was obvious to us all that this was going to be the warmest day of the year so far and we were going to be in for some cracking views, which makes recceing so much easier when you can spot the next top and the best line. Kim was absolutely brilliant  at showing us both the best route choices(but that's what you expect of someone who has done the round in a little over 19 hours!!!)
Im not sure of any of the split times, but we were in Honister in 4 hours and that was with stopping on each top, taking random photos and talking to the odd walker.
It was interesting going up Joss rake??? on Kirkfell where we had to use our hands a bit, on which Gary commented that it made a nice change rather then using your legs, you can always do the round walking on your hands then Gary!!! 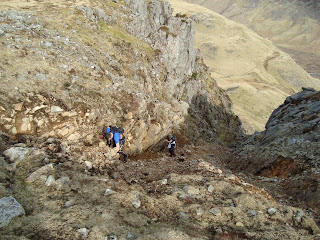 Gary and Clare climbing Kirkfell
On reaching Honister Clare dropped out but Gary had arranged another pacer to take her place with Anja and her dog, sky joining.
After about 15 mins we were climbing Dalehead which did seem a longer pull then I can remember doing on the Borrowdale fell race, but we were still moving quickly. 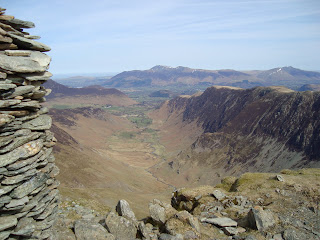 The view from Dalehead
On climbing Robinson we again stopped for a brief chat with some other runners who were recceing the teenager with altitude race route. The descent of Robinson went well, but I will have to be careful on the rocky scramble bit when my legs will be long gone.
Gary seems to have everything in place for his attempt, all his pacers seem strong with navigation, encouragement, and organisation, which was really apparent when we got to the road section and they all produced road shoes out of there packs, Anja even running ahead and getting Gary's ready, and Kim even producing some racing flats!!!
Whilst the shoe change was going on I shuffled about, feeling a little stupid for not bringing mine, but we soon off again. 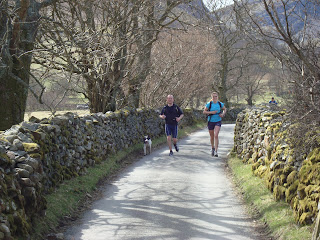 The roadies in there cushioned shoes!!
I have raced along these roads in various road races before so I felt very comfortable and strong running back to Keswick via the bridge which is now open again at Portinscale.
We got to Greggs, beside the moothall 2 hours and 18 minutes after leaving Honister.
Far to fast but still a good run out and the most pleasing thing for me was even running at that pace I felt like I could of carried on to do leg 1, at a much slower pace though!!!!!
Food intake was 3 Eccles cakes, 4 Gels,  multigrain bar and 1 ltr nuun and1/2 ltr diluted vimto 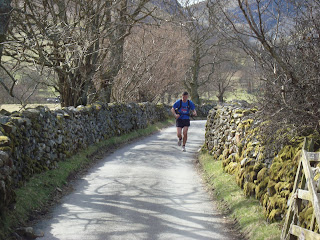 Gary pounding it out
Thanks to Gary for asking me along and it has made me realise that I need to get myself more organised in terms of getting my support up to date and even registering my attempt.
Posted by Stu Stod at 12:55

Lovely day out there Stu, long weekend in the lakes for me too but can't get the photo's on just yet. Have you set your date yet? Which weekend in May??