Since my last post I have managed to get a few runs in, one of them been leg 1 on the weekend when Mark Smith was doing his fantastic Bob Graham Winter Round.
I followed Marks footsteps in the snow from Skiddaw onwards(I was up there at 8am tho) up to Gt Calva, where I noticed he had made his descent through the heather, so I followed(I usually go by the fence line). I have been this way once before but I think I will stick to the fence for my attempt, the heather been too high and hidden holes had me on my backside more then once. I picked up his footprints again climbing up Mungrisdale Common but lost them before Blencathra where after looking at Halls Fell I decided Doddick was the safer option which I descended in 28 mins. Total leg time was 3hr 12mins.
The day after I ran up to Atrhurs pike from Pooley Bridge post office.
Hill reps have been done too with Eden Runners(agony).
Xmas eve I got up early and ran to Askham(in the dark) and up on to Haughscar Fell where the snow was quite deep in places. It had been my intention to carry on to Atrhurs Pike but the visibility on the top was very poor, so I turned back. Running back I bumped into Gary Johnstone who is also planning his BG on the same day as me, I have also had a email of Seb Planz who has decided on the same night, so it looks like they will be plenty of company on the day of the round. 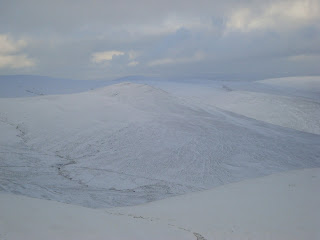 Yesterday (Boxing day) along with Steve Bennett we ran up to Skiddaw , parking at Threlkeld. The lower slopes of Latrigg were very icy, but once on to the slopes of Skiddaw it was snow all the way . We managed to run it all, up to the last gate before the summit, where the snow was so deep you could step over it! From the gate to the summit we couldn't tell the sky from the ground, but as so often happens after reaching the summit everything clears and seems calm again, all tho this didn't stop Steve falling and taking a proper face full of snow, much to my delight!
The run back along the railway line felt tough, but a very enjoyable 2 and half hours.
Still over a week before I return to work so hoping to get a couple more runs in, but first Sue wants to go shopping to Carlisle!(again).
Posted by Stu Stod at 10:34