The week after the FRA relays I did no running at all, serious flu. (Susan  says it was a minor cold at worst.)

I am not one of them fellrunners who refuse to run/race on the roads, quite the opposite really - so it was my intention to up my road mileage for the up coming  Brampton-Carlisle 10 mile road race.

2 weeks ago I left the house and ran a hard very hilly 9 mile circuit, and was pleased to see my time was 59 minutes. Not bad, I thought, for starters.
The next night I planned to do the same route, but as a slow recovery run..... I got carried away and did the same time as the night before.
The following night was club night and with my run up to the club, back from the club and the clubs "rocket run" my mileage totalled 8 miles.
3 days in and 27 miles covered, all good sessions.

This is why I'm useless ont roads.....
The next day my left calf is seized up and I could hardly walk let alone run.
2 days rest and I set off to do a 12 miler and I cut it short to 6. Calf gets worse the further on I run.
The next day I take desperate measures......the road bike comes out and I do 45 miles that include kirkstone pass.
Another 2 days pass before I try and run again and this time its hill reps at the club.
I feel fine for the first 7 but begin to feel the calf tighten again on the second 7. I jog home knowing im an idiot.

On Saturday  the bike comes out again and I do a 56 mile circuit that include kiirkstone again, but this time I carried on down to Ambleside and back along Thirlmere. Really enjoyed this apart from the frost bite on my fingers!!
Yesterday I parked at Seathwaite farm and jogged/walked up to Scafell Pike via the corridor route. I then made my way to Sca Fell via Fox's Tarn and returned to the Pike again before I made my way back to the car, again via the corridor route. Glorious blue sky's and never seen a soul til my descent.
Today my hips are aching.....I'm such a wuss!!!

I wont try and run again till Wednesday night now.
Some photos below from the last 2 weeks.
....and finally 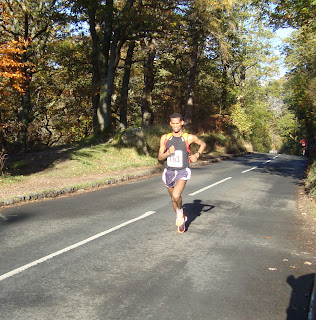 exhausted just reading all that!!

great outings stu. you're very lucky to have 'that' bang on your doorstep. jealous.