A road race, a fell race and a bike challenge.....

The ankle is still too sore to even attempt to run at the moment, so sore that I was thinking of going to the doctors last Friday, but it is improving each day now. The swelling and bruising has gone but what felt like a tear at the back is still very tender. Hoping it be ok by Friday evening as im helping on a BG attempt , but to be on the safe side, Steve B has stepped in to assist too.He knows leg one has well as anyone now.

As much as I enjoy taking part in races, I also enjoy going to spectate  and on Sunday we (Sue came along too, shops) drove through to Keswick to watch the half marathon where a number of folk I know were running.
They have changed the course since I last run it 2 years ago and the start is now in Portinscale, which meant a 2 mile hobble for me.

Steve Angus finished 10th and I think if I had been running I would of got 9th (eagerly awaits some witty remark from my Scottish friend.....)

Wednesday evening I cycled out to Dockray to watch the start of the Dockray-Hartside fell race.
There was some confusion if this race was on or not. In the end it was ran, but with no entry fee, numbers or marshals.
42 runners ran and at least half were from Keswick ac,  it was their club champ race.
This was my first ever fell race that I competed in and it be a shame if bureaucracy stopped it in the future.
Results on Keswick ac blog
My photos and some more here

This morning I got up early to cycle up to Kirkstone pass to watch the Fred Whitton challenge.
This was the first time I have attempted to bike up this pass and to be honest I found it rock hard. Determined to bike it all though I stopped with about 30 yards to the top, im so disappointed in myself now, but at the time it was too much for me.( my shame, with the hundreds of cyclists storming down, and me stood at the side of the road, pretending to watch, where in truth, I was knackered and getting my breath back!!)
Took some photos on the the top and had a gel. 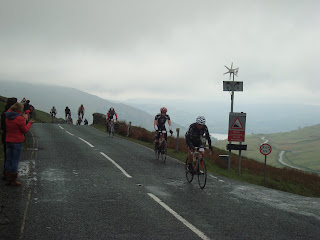 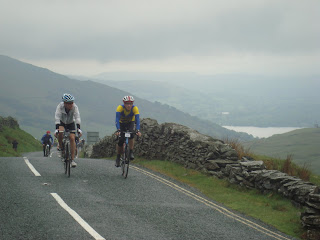 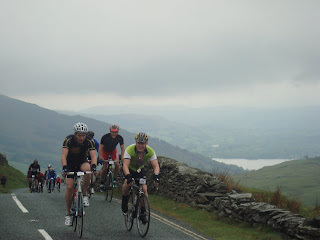 If I thought the ride up was eventful, the ride down the pass was something else.
For me, Im flying, if I go any faster I would take off.... Wrong!!!
In truth, im getting passed by cyclists who must be bloody mental. I was bricking it, and with good reason too.
Half way down a spectator is stood in the road, arms above his head, indicating for us to slow down (well them, not me), a cyclist has come off and he is sprawled at the side of the road and his bike is in the middle of it. We get pass and then it mad again.

At the bottom of the pass I manage to pass a cyclist ( he was having toilet break ) and once on the flat Im holding my own, just. (yes I know, they still have 90 odd miles to go and 4 more passes, at least).

My heart went out to a fella who had passed me earlier but was now on the side of the road, with a puncture ( I actually heard the bang) and as I passed him, his face said it all. He probably had trained all year for this and in a second, all hopes of a good race time gone.

My plan was to stay on the lakeside road and go home, but im enjoying this now and decide to add a few more miles on and carry on up to Dockray and onto the A66.
On the long gradual climb upto to Dockray, I get passed lots, but also I pass a few too.
At the top I stop and talk to Steve Angus for a while who is taking photos, again.. I also stopped to talk to Haz for a short while on the lakeside road, who was also taking snaps.(his be better then Steve's, probably.(just in case he didn't bite first time)

Biking home through Greystoke and I start thinking about giving it a go one year, but I would have to start biking a lot more and also learn to ride without stabilizers.
Posted by Stu Stod at 14:13

i'd love to have a go at the fred whitton but your brilliant observations have confirmed what i feared ;) hope the swelling's going to down.

hope you're better soon
keswick was one of my first ever races..i had a mare..it was hot and i was ever so slightly hungover of all things!

It's always good to see you at races either running or supporting. Hope the ancle continues to improve as want to race you in the autumn!

Very surprisd to see you pedal up that day.
I too hope your uncle get better soon