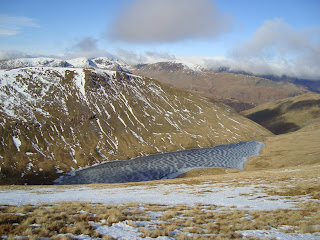 Hayeswater
This week I have kept away from the Bob Graham route and returned to my favourite fells, the High Street range on the eastern flanks off Ullswater.
On Monday evening I parked up at roe head and ran up to Arthurs Pike, spending a few minutes on the summit watching the sun go down the back of Blencathra. Ran back to the car feeling very satisfied.

On Wednesday evening, along with Steve B and Sam Ware (and Sam's dog, Fern) we all ran up to Loadpot at what felt like a very fast pace. There was still patches of snow and ice in places so we were all fighting to find the line with the most grass showing. We ran up the front of Loadpot and had a bit of a sprint to the trig point, which Steve won, mind you he did have a point to prove after dropping out at Clough Head the week before!! On the way back the head torches got turned on the pace was even faster on the way back. A good night of running.

Thursday I did 12 road miles which included 2 laps of the new streets race route. Did not enjoy this at all, I think my legs were wanting a rest or maybe something flatter would of been better for me.

Saturday I ran up to Thornthwaite Beacon, my favourite run, which I have neglected for a while.Not sure on the distance but I seem to think it might be 20 miles.  High Raise, Kidsty Pike and High Street were still in snow, the sort that doesn't quite hold your weight, making it even harder to run in. Ran it all, only stopping to take the odd photo and sitting down at the beacon to eat my Eccles cake. 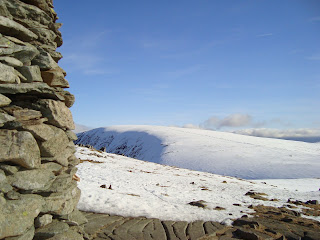 Looking back up High Street 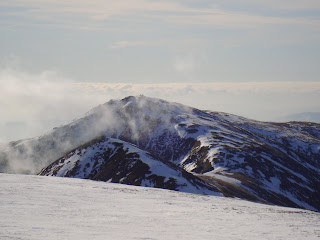 Froswick and Ill Bell
Running back and my legs were once again feeling it, especially the down hill parts, they never felt relaxed and I could feel every landing going up right through my knees.
Got back to roe head and bumped into Dave Owens (again) and he thought I might be over doing it. That is what I was thinking the last 3 miles too, so I will maybe back off a bit, but it was probably just one of them days, I hope.

So on Sunday I went from 20 odd miles to 3 and it was the best 3 miles I have ran for ages and a new fell for me too. Great Mell Fell is a fell I always look at when driving to Keswick and for the past 2 years I have wanted to run up it but never have.....until today.
Parking my car at the bottom of the old "firing range" I set off running to the foot of it, deciding on the way that I would run up the front of it, two thirds up and im bent over, hands on knees, maybe running it a a bit optimistic . Get to the top a short while later and its over  too quickly, so I run down the other side, which is more gentler and best of all is im running on soft grass and mud, not hard frozen ground or snow and ice and it feels brilliant, for the first time since December the ground is soft. Get to the bottom and I run all the way back up to the summit and back down the steep side. I am reminded here of just how crap I am at descending but im soon back at the car. This is one Fell that I am going to revisit again and again. 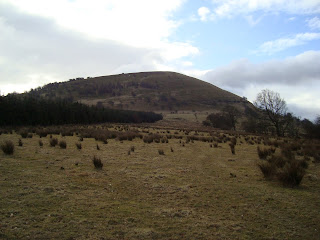 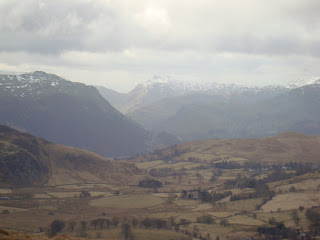 View from the top
So with over 50 miles this week I will keep going but not do two long runs so close together again for a while.
Posted by Stu Stod at 22:01

Each week I ask three different people to keep a dairy for five consecutive days, to tell the story of their lives.

Each diary entry needs to be 130 words, which is roughly 45 seconds in length.

Once the diary is written, we then arrange a time to record it... And then I mix the three different diaries together with a narrator and theme music, and make a mini Cumbrian soap.

It's a bit of fun, and works really well, and for it to last I want to keep bringing new voices to the feature.

Would you willing to have a bash?

here are my contact details... I look forward to hearing from you,

err, thanks, but no thanks Steven.

Try this fella (from Carlisle too)
http://cumbrianadventure.blogspot.com/
He tells a reet good yarn!