Things are getting back to normal, the back of the knee as improved but the hip/groin is still causing me discomfort especially on down hills.

Last week I had my biggest mileage for 4 weeks, hitting the big 25.
17 of these were done on leg 1 of the bg route where I joined up with Steve Bennett, who was wanting a long slow plod on the fells and was very keen to show me a fast line of Gt Calva.

We agreed that if I was struggling that I would skirt around Skiddaw and meet him at the bottom of Gt Calva.
On reaching the turn off point for me to skirt away (and miss the big climb) Steve convinced me to carry on and he would go steady.
5 minutes later and Steve is a good few yards ahead with me hanging on just to keep a glimpse of him. We reached the top in 63 minutes and again he assured me he would slow it down a bit. We crossed the fence and hes flying off towards Hare Crag, so I stretch out my legs and overtake but soon have to ease up. Steve's
loving it but I will get my revenge.
We are finally on Calva and Steve is dragging me through the high heather on his short cut. We reach the Caldew some 20 minutes later where it should of took us 10 at the most. He is still convinced tho that its easier then the fence line........how he works this out is beyond me.
We descend Blencathra via Doddick and this is where I really feel my groin but still get back to the cricket club car park in 22 mins whilst Steve ( who is flying, it has to said, does it easily in 19)
A big test for me and glad I decided to tag along.

The next few weeks im going to do some easy miles on the fells, not worry about racing and try and get my little bit of speed back, which I've definitely lost.

I'm thinking of entering the langdale road marathon in September but rather then train on the road for it, do most of my running on the high street range where it is all runnable. Perhaps I will do one session a week on the road, this might be the new streets race route or I might go to the grass track and do a few 800m??? 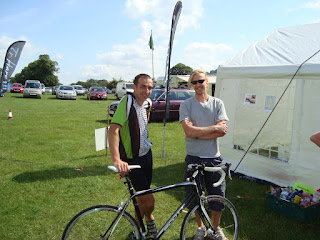 ]
Steve Bennett and Steve Angus
These two lads (has been's!!) above are well experienced road runners, both sub 3 marathon runners and both done fantastic times at Langdale, if I could get within 15 mins of their time I'll be well pleased.

On Sunday I rode out to Ullswater to watch a triathlon where crazy people swim a bit, bike a lot and then run up and down a valley............mad, but very entertaining. 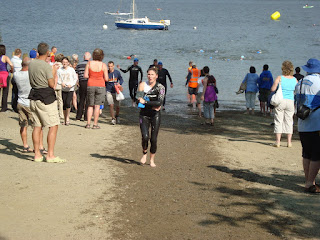