An All Fell Week

Occasionally I get asked to cover night shift at work, which means I get the afternoon free, which means I get more daylight time to run on the fells  (the only downside is when im at work im knackered).
On Tuesday afternoon I parked my car at Scales and ran up Blencathra. At the moment im running it all with the view that when I attempt the BG ,the ups will feel a little easier when walking.
On Wednesday I parked at Threlkeld and ran up to Stybarrow Dodd and back. Clough Head tho was not an option to run, instead I got hands on knees and walked up. The summit was reached in 43 mins. From Clough Head I ran all the way up Gt Dodd, Watson Dodd and up onto Stybarrow Dodd, where I promised myself a drink for a reward. Only to realise I had forgotten to put it in my backpack ( how many times). I retraced my steps running all the way back to the car  (and water) at Threlked. Very pleased with my time and effort.
Friday I only got 3 hrs sleep so no run.
On Saturday I parked again at Threlkeld and ran to Keswick via the railway line to run leg 1. Running up Latrigg I knew I was going to struggle to run up Skiddaw but I pushed on telling myself if I stopped I would fail the BGR. Well it looks like a big fat fail in May because I walked for about  3 mins of it. 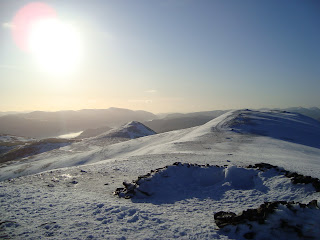 Looking back along Skiddaw 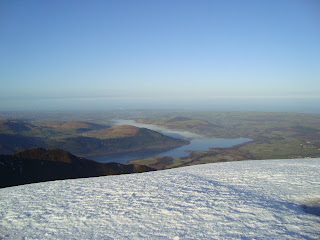 Bassenthwaite Lake
I picked the trod down to Hare Crag and was soon climbing Gt Calva. Up ahead I could see 2 figures, so I pushed on to try and catch them up. When I did finally reach them it turned out to be Gary and Clare. Gary is attempting the BG on the same night as me, but setting off a bit earlier. All 3 of us then ran together up to Mungrisdale Common where Gary had arranged to meet one of his mates, Dave Jacks.
Dave Jacks has got one of the most astonishing tales to tell of the BGR. Last year he failed it by 1 minute!. He is having another go this year and I really do hope he succeeds. We all carried on up to the summit where we descended via Doddick. At this point I pushed on ahead because I wanted to change my top at the car and fill my water bottle up so I could carry on up to the Dodds.Dave was also going as far as Raise where he had arranged to meet his brother and descend down sticks pass.
On the lane up to Newsham House, we met 3 fellas looking at a map. It turned out they were recceing for the Lakes 100. They were going to run along the coach road but decided to go up to Gt Dodd instead. The next 2 hours of running was a fantastic insight into long distance running with all 2 out of  3 of them having done all the big rounds and Will doing his Paddy Buckley this year to complete his set. Amazing fellas with good sound advice. They even said they would run in with me on leg 5 but I think that was just a kind gesture, but it shows what a great community there is in fell running. What else amazes me is the miles these people drive just so they can run on the fells. Top fellas. 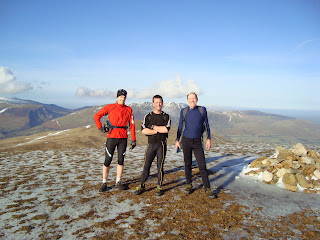 Dave Lucker, Will and Ian on Gt Dodd
On Sunday I parked at Roe head and ran up and over Loadpot, onto Wether Hill and down into Fusedale and up and over Steel Knots.  I ran in to Dave Owen who was doing the same circuit . Dave is also pacing me on leg 2. He tells me that he is not running as well as he was a couple of years ago, but that didn't show today.
So a good week of running, all fell miles too.
Posted by Stu Stod at 19:19

you're sounds pretty strong at the moment, keep at it!